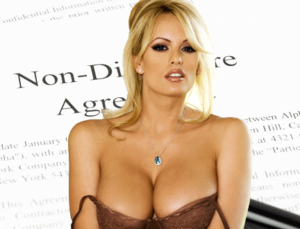 In Stormy Daniels v. Donald J. Trump, Michael Cohen, and the LLC that paid her the $130,000 in hush money, in federal court in Los Angeles, she is asking the court to let her out of the non-disclosure agreement she signed. The actual Non-Disclosure Agreement (“NDA”) is attached to the complaint.

Stormy Says: Trump never signed the NDA so he would be able to deny any knowledge of the agreement, therefore, no agreement was ever entered into by all the parties. Contract law says that there has to be a “meeting of the minds”. In fact, when asked by reporters recently, Trump said that he had no knowledge of the NDA at the time it was entered into, so there couldn’t have been any meeting of the minds.

Stormy also Says: The NDA shouldn’t be enforced because the payment made to her was illegal. When a contract requires either party to break the law to complete the contract, the courts generally will not enforce it. For example, if someone enters into a contract that requires someone else to perform an act of prostitution, the court will not enforce the contract for either side, because to complete the contract, someone had to perform an illegal act. Stormy’s argument is that either Cohen, or the company that paid her, had to violate the campaign finance laws to carry out the contract. Cohen has publicly said that he paid the $130,000 out of his own money, and Stormy’s argument is that the payment for her to stay silent was really made to help Trump win the election, so it was effectively a campaign contribution by Cohen of $130,000, which is way more than the $2,700 an individual is allowed to make (corporations are not allowed to make any contributions at all). Incidentally, if Trump had admitted knowing about the NDA and said that the payment was made out of his own money, or that he had agreed to pay the $130,000 back to Michael Cohen, there would be no election law violation at all, because Trump (or anyone else) is allowed to contribute his own money to his own campaign with no limits. 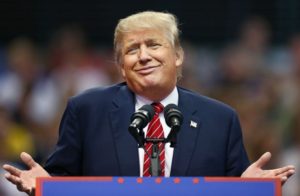 The Donald Says: Even if he didn’t sign the contract, Cohen signed it on behalf of the company that paid her. More important than that, basic contract law says that an agreement only has to be signed by the person you are trying to use it against, so it became enforceable when Stormy signed and accepted the money. Trump can therefore enforce it against Stormy whether he signed it or not, and it is just not fair to let her avoid the deal she made because the rights she sold are now worth a lot more than $130,000; a deal is a deal. Besides, even if Trump didn’t sign, it was clear that the company that paid the money was paying it to protect Trump, so he was what lawyers call a “third party beneficiary”, i.e., it was clear that the contract was being made for Trump’s benefit. Whether he signed or not, Stormy can’t really say that she didn’t know the contract was for Trump’s benefit.

Cohen and the Donald Also Say: Cohen is very close to Trump and has been acting as his lawyer for many years, so he has acted many times to protect Trump.  He did this by paying women off to stay quiet just like Stormy, who was not exactly the Donald’s first love, and has done this well before anyone thought about any elections. Therefore, this was not a campaign contribution and it was not illegal. 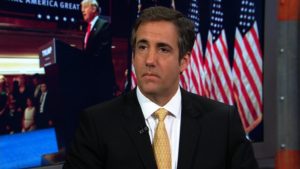 The Search Warrant Hits and the Donald Asks to Put the Stormy Case on Hold:

Next, on April 9, 2018, federal agents in New York seized numerous documents, phones and computers from Michael Cohen, the president’s private attorney. Cohen’s lawyers ask the judge to stop the FBI and prosecutors from looking at the materials because Cohen is a lawyer, and the documents are subject to the “attorney-client privilege”. President Trump asks to “intervene” (join in the request) because he is Cohen’s client, and he has a legitimate privacy interest because whatever he told his attorney is privileged. The judge gives Trump permission to join the case.

Even though there is no criminal case pending against Cohen yet, it looks like the Government will probably bring an indictment against him.Trump and Cohen ask the California federal judge to put the Stormy Daniels case on hold (to “stay” the case). If a witness in a civil case is asked about facts for which is he under criminal investigation, he can use the Fifth Amendment instead of answering the question on the grounds that the answer might incriminate him. The fact that someone “took the Fifth” cannot be used against a defendant in a criminal case, but it can be used against anyone in a civil case. If jurors hear any witness take the Fifth in a civil case, they will usually assume that he is guilty of criminal conduct, and it becomes very difficult for him to win the civil case. President Trump, who is also a party to the Stormy Daniels case, is claiming that Cohen is the only person in the case with knowledge of the facts, and that if Cohen has to take the Fifth instead of testifying, Trump will effectively be deprived of his right to present his defense.

The Judge in the Stormy Daniels Case Says: He is not deciding the request to put the case on hold based on what Cohen’s lawyers have said; he wants to hear from Cohen himself. He has ordered the defense to file an affidavit signed by Cohen himself, showing why he really needs the stay, by Wednesday, April 25, 2018. He’s going to have to convince the judge in California that he really will have to incriminate himself in order to testify in the Stormy Daniels case, which is not a good position to be in, particularly in such a high profile case. I can’t wait to see it.

Stay tuned for the next blog post about the DNC lawsuit against the Trump campaign.